An Example of Love 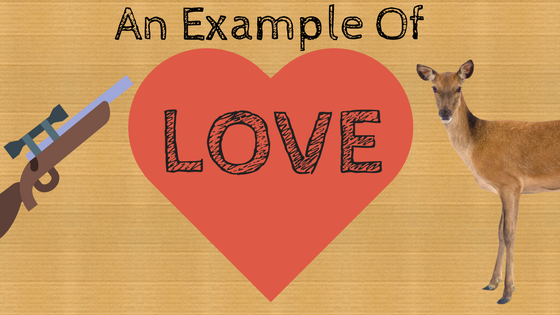 This past winter, I heard a story during a service at a church that really caused me to think. I would like to share the story and some reflections with you.

The story, given by a pastor, is about the pastor’s father and a guy named Jim. The father is a big hunter, and owned a hunting store in northern Wisconsin. Jim was from Ohio, and enjoyed the occasional hunt, as well as traveling. One year, Jim decided to take a trip up to northern Wisconsin, and went into the father’s store. The two ended up talking for a while, and continued to talk after Jim went back to Ohio.

To understand this story, you need to know the backgrounds of these two men. Jim was a follower of Jesus Christ, and believed that salvation/eternal life only results through the life, death, and resurrection of Jesus. He often saw things from an “eternal perspective” – with God and things that he believed impact eternity being the most important in life.

The dad would consider himself to be a Christian, in the sense that he went to church every Sunday. He had more of a  mindset of doing good things, and bringing his family through the right religious steps. In other words, he would be more considered to be a “churchgoer” than an everyday follower of Jesus Christ.

The next fall, Jim and the dad decided to go hunting together in Wisconsin. This soon became a tradition. Every year, Jim would take the 10 hour trip up to Wisconsin to go hunting with the dad. Over time, the dad noticed some interesting things about Jim. He would not get drunk in the tree stand; he had an occasional beer, but brought soda to drink for the most part. He also would not swear or tell crude stories. To the dad, Jim just seemed like an overall genuine guy. Jim would occasionally mention his love for Jesus, but the two did not get into full conversations about that topic.

The two men’s friendship continued to build year after year, and Jim eventually brought some friends (who also were followers of Christ) on the hunt. Again, the dad noticed that there was something different about the people in this group than other people he spent his time with… something about the love and joy they expressed in their interactions with him and with each other.

Over time, spiritual conversation opened up between Jim and the dad. They discussed the role that Jesus had in their lives. Jim talked about God’s “grace” – that Jesus paid for the consequences of sin that we deserved, and that we cannot “earn” God’s favor through going to church or being a good person. These things did not resonate with the dad right away.

17 years into their friendship, Jim received a phone call from the dad, presumably about their next hunting trip. However, the dad instead called to tell Jim that Jesus had come into his life, and that he has surrendered his life to God. Jim once again took the trip up to Wisconsin two weeks later to celebrate with the dad. Later, the dad’s wife and children also decided to begin following Christ. The men’s friendship continued for another 30 years, until Jim died in 2012. The dad’s son went on to become a pastor, hence him telling that story that morning, hence me telling you this story right now.

I think this story has something to offer for people who follow Christ and for people who do not. For Christians, Jim is an amazing example of living for Christ. After this story, the pastor brought up the Bible verse 2 Corinthians 5:16 – “So from now on we regard no one from a worldly point of view”. He explained that Jim viewed his dad through “the eyes of the gospel”. He could have just seen his dad as a “hunting buddy” and stopped there. Instead, Jim saw the human value that he had. He knew that God loved him, died for him, and wanted to have a relationship with him for eternity. And Jim continued to spend time with the dad, even though they were far apart. When they were together, Jim simply lived as a follower of Christ, being open to sharing his love for Christ and the gospel when conversation led there.

For everyone, including people who do not follow Christ, this story is an example of love. Jim believed that the dad could have a fulfilling, forever-lasting relationship with God, and wanted him to have that relationship. And he expressed that belief when the dad asked about it or was open to talking about it. He did not do this in a forceful way. Instead, it just happened slowly and naturally through their friendship. Jim did not just “give up” on their friendship because the dad believed something different than him.

Jim believed he knew what was best for the dad, which was something that would affect him forever. And Jim took part in leading the dad down that path. You can say that Jim had a false belief and thus it was a pointless path (which today the dad would definitely disagree with!) However, it seems to me that Jim’s desire for the father to know this loving God that Jim believed in, is in itself an example of love, whether misguided or not.

With that, I finish with another Bible verse that the pastor shared when telling the story. It comes from 2 Corinthians 5:14-15 – “For Christ’s love compels us, because we are convinced that one died for all, and therefore all died. And he died for all, that those who live should no longer live for themselves but for him who died for them and was raised again.”

Jim was compelled by Christ’s love, and was convinced that Christ died for all of humanity. He did not hold on to that belief selfishly, but instead shared it when the opportunity was there. And those actions led to a friendship that, if the verse above is true, will last literally forever.